Doers Don’t Get Their Inspiration at School

Published on November 5, 2012 by Mike Lanza
Posted in 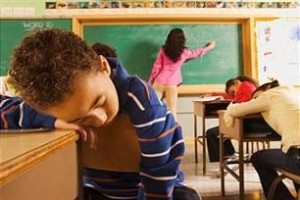 These doer kids who I’m studying (see my first article on them, Doers Don’t Watch TV) are incredibly action-oriented. They’re articulate. They ooze potential, yet they seem very self-assured and happy. In short, I can’t imagine a group of older kids that I’d rather my young kids emulate.

So, these kids must all be superstar students at their schools, right?

Actually, they’re not. Most of the kids in these groups get little, if any inspiration from school. For the most part, they do attend school, but they don’t enjoy it, and many aren’t even particularly good at it.

For example, consider the story of Thiel Fellow Chris Rueth. As a child, he hopped between different schools and homeschooling. He had symptoms of ADD and didn’t fit in well at school. Nonetheless, he’s grown up to be an exceptional doer, and very well-educated as well. Instead of attending college, he’s now working at a startup called Community Kitthat plans to bring water, power, shelter, and education to developing communities, customized on a case-by-case basis. 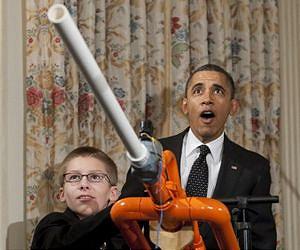 Young Maker Joey Hudy demonstrates his marshmallow cannon to President Obama. He sees himself as a maker first, not a pupil at school.

Joey Hudy is an outstanding young maker who is famous for the photo of him demonstrating his marshmallow cannon to President Obama. He notes that he “came up with the idea for the cannon from being bored at school.” He’s gone on from there to be a creator of electronics kids for MakerShed (for instance, see this one!). His mother, Julie Hudy, says that becoming a maker has totally changed his life. Joey has Asperger’s Syndrome and has had a difficult time with school, but now sees himself as a maker who is very connected to the maker community.

Syreeta Gates is a dynamic social entrepreneur profiled in Creating Innovators. An African-American young woman from a disadvantaged background, she never got much out of school. “I was a member of the two-thirty club in high school – meaning that I was out of the door at two-thirty. I nearly flunked out.” She’s been struggling with college as well. By contrast, she notes, “It was when I began to volunteer work that my life really started.”

So, what role does school play in young doers’ lives? While it doesn’t provide the spark that has led to their outstanding achievements, it does perform an important role of teaching fundamental skills – reading, writing, arithmetic, and social skills. Outside of some exceptional homeschooled doers like Chris Rueth, most doers are not primarily self-motivated and self-taught.

These young doers and their parents tend to discount the value of school when they talk about it because we, as a society, expect schools to do many things that they’re not particularly good at. In other words, they gloss over the value of school because expectations for school are way too broad.

Think about it. How many great doers – makers, software hackers, entrepreneurs, and social innovators – got their inspiration at school? On the other hand, how many people learned most of their reading, writing, arithmetic, and social skills outside of school?

The answer to both questions is “very few.”

School is very important teaching fundamental skills – verbal, mathematical, and social. However, don’t expect your child to become a great “doer” if his or her life is consumed with school and homework. My research shows that doers get their inspiration, as well as their important experience, almost entirely outside of school.

The implications of this observation are profound. If you want to help your child to be a doer, you need to optimize his or her life outside of school for “doing,” and to keep homework from dominating your child’s life. That’s the focus of my research these days, as well as a book I may be writing.