When Play Becomes Useful to the Family

Published on August 3, 2012 by Mike Lanza
Posted in 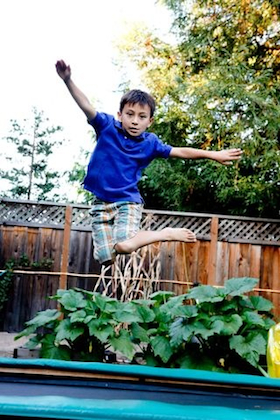 Marco jumps on our trampoline, with our vegetable garden in the background. His play in the backyard flows seamlessly back and forth between these two areas.

Marco, age 8, plays a lot more than most of his peers. My wife and I are very happy that he has such a fun childhood, but we also have a family to run. Fortunately, he’s begun to channel some of his play in a direction that helps our family function.

“Dad, I forgot! I gotta do it now, before I go to bed!!!” exclaimed eight-year-old Marco last night.

“Don’t worry about it. Missing one day is no big deal.” I replied.

But Marco insisted. So, while I nestled up with his two younger brothers in bed upstairs to read them a Curious George book, Marco walked out into the twilight alone and methodically watered each vegetable bed, then each fruit tree.

While my wife and I approve of Marco’s passion for gardening, we haven’t pushed it on him at all. We didn’t say, on any particular day, “Marco, we want you to take care of our garden. You’ll be responsible for the following duties: . . . ”

Instead, he found a passion for gardening inside himself as he joined my wife, day-by-day, in her gardening chores.

For Marco, gardening is not “work” that he’s forced to do. Instead, it’s an integral part of his play life in our backyard. Here’s a rundown of his activities yesterday in the late afternoon and early evening.

Marco’s gardening is not just fun for him. It also puts food on our family’s table and money in his pocket.

Step 2 above happens practically every day. In order to get paid for his harvests, he must create a receipt to charge us. Every few days, he uses produce prices he found at our local farmer’s market to do calculations (e.g. if green beans cost $3/lb., how much should he charge for 4 ounces of them?). When he produces a receipt with a total, I pay him for his harvest.

So, Marco’s project is looking suspiciously like a real business. The only thing missing is that he’s not paying for the costs – the seedlings, seeds, water, tools, and land. We’re talking about doing that, and we’re also talking about increasing the land under Marco’s cultivation so he can start selling vegetables to his grandparents, uncles and aunts. Yes, he’s thinking big…

“I’d love to work in a nursery or a garden when I grow up. You wouldn’t even have to pay me,” remarked Marco. Of course, he’ll soon learn that earning money is necessary in our society, but wouldn’t it be wonderful to earn money doing something you love to do? That’s Marco’s first money-earning experience. I hope he carries it in mind throughout his life.