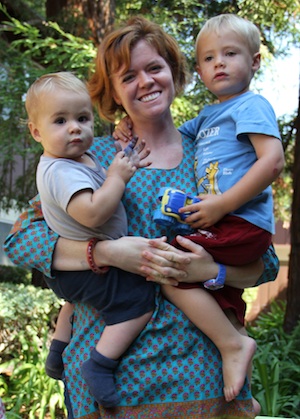 Jennifer Wagner is a nuclear engineer. Right now, though, she’s mostly a stay-at-home mom, working just two days a week. She likes it that way.

“I don’t really miss the financial rewards of working full-time,” she says. Jennifer, her husband, and her two boys (3 and 1) live in a cozy apartment complex in Mountain View, California. They could probably afford a nicer place if she was working.

“Back in Texas,” Jennifer Wagner notes, “everyone our age we know who has kids has a house. It’s much easier to buy a house there.” They moved from Texas to Mountain View, where housing prices are much more expensive, two and a half years ago.

Still, she’s very happy living where she does.

I can’t argue with her. I saw it for myself at the courtyard of her apartment complex one summer afternoon. A half dozen preschoolers were buzzing and laughing and crawling and running nonstop. Mostly, they were playing with a cardboard box. I was enthralled. Yes, I’d seen my kids play with a cardboard box before, but I’d never seen so many kids play so enthusiastically for so long with such a simple thing. 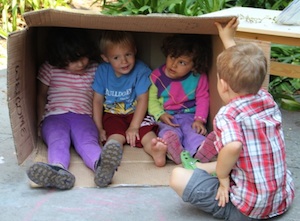 Three moms, Jennifer included, were around the courtyard, too, playing “tag team” with each other. One or two would go inside their apartments to get something done, and the remaining mom or moms would keep an eye on the kids. Clearly, everyone was very comfortable with each other.

On the way over to Jennifer’s, I had just passed by an upscale suburban playground scene with a half dozen or so individual kids playing independently, a disinterested nanny hovering over each one. Yawn… I’ll bet they all came from nice houses with manicured lawns. The kids at Jennifer’s were much, much better off.

Jennifer told me that kids play in the courtyard much like I saw them almost every afternoon. “We have no air conditioning, and our apartments are pretty small, anyway,” she said. “The windows and walls are thin, but they let us hear friends playing, so we go outside.”

“I know that we’ll eventually leave here to live in a nicer place, but I’m not in a hurry,” Jennifer said. Indeed, the place does have an impermanent, “we’re just visiting” feel to it, compared to neighborhoods with homeowners. The moms at Jennifer’s complex clear the courtyard of all chairs and “kid debris” every day. In single-family home neighborhoods, kid debris, as well as seating for adults, lies around in front yards indefinitely.

Jennifer told me about a recent incident that highlights their non-owner status. “We posted flyers saying we were going to have a party in the courtyard, but the building manager told us we couldn’t do it.”

“That’s so stupid,” I replied. “You’re out here every day. Screw the manager. I would have just thrown the party anyway.”

That was Mike-the-homeowner talking. Jennifer knows better – that renters can’t beat the system.

Frustrations like these with apartment living will probably drive her and her husband to move out, but the irony is that, if they buy a nice suburban house like their Texas friends, they may not be able to throw as fun a party there as they could now, in their quaint apartment courtyard.

“If and when we do move into a house, I hope we’ll find a Playborhood like this one,” Jennifer said.

I bit my tongue. Playborhoods are rarely just waiting to be found, especially in single-family home neighborhoods, and it’s an awful lot of work to create one. Jennifer’s very fortunate to live where she does, even if she has no air conditioning, thin walls, and can’t throw an outdoor party. Honestly, if I were her, I don’t know if I’d leave.