When Adults Play With Kids 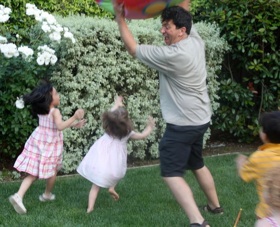 Those of us who advocate children’s play are split regarding the question, “Should adults play with kids?”

I think a better way to frame the discussion of adult involvement is to ask the question, “Should kids control their own play?”

This seemingly subtle difference is crucial.

Adults should only be involved in kids’ play if they can figure out how to let kids control what they do and how they do it. In other words, if adults participate, they should be part of the gang, not leader of the pack.The “leave those kids alone” purists out there would argue that kids can’t be in control as long as parents are around. This is the central idea behind the bestseller from the 1950s, Where Did You Go? Out. What Did You Do? Nothing., which was profiled in a recent article on The Atlantic.

I’m very sympathetic to this point of view, but in this day and age, when kids rarely find other kids when they go outside, they need all the playmates they can get.

So, I’m a very big, reliable playmate for my boys, ages 6-1/2, 3-1/2, and 1-1/2. However, I try hard to avoid forcing them to do anything in particular. They choose the games. They order me around. I do buy lots of amazing play things and install them, but once they’re installed, my boys figure out what to do with them.

I’m a play resource for my boys, not a play dictator. I’m another body for games like street hockey, a tall and strong guy for reaching and carrying things. I can make them pop up high when I jump on the trampoline with them, and I can turn on fun music in our front and back yard that energizes them.

When I see that they’re doing something I consider unwise, I tell them why I consider it unwise, but I rarely stop them. I’m more the nerdy know-it-all kid than the NO-NO-NO! grown-up.

Here’s Marco doing a crazy trampoline trick he made up himself. What kind of parent would let their little kid do a thing like that?

For instance, I let them do all sorts of daredevil things in my presence. Yes, I admit that I do speak up occasionally when I see them doing something really scary, but usually it’s to make them aware of dangers they may not be aware of (e.g. climbing on something slippery after a rain).

I let them play in the calm street in front of my house, but I do remind them often to watch out for cars. Eventually, they have learned about staying away from cars, but they’re not afraid of the street.

In our creek, I let them do things that would make environmentalists and nervous parents cringe. I utter not a word when they break sticks off trees and squash insects. I let them forage anywhere with only an occasional warning about poison oak.

My ultimate goal is for them to be independent, but to want to play with me on occasion, too. They should be able to go to friend’s house on their own to play when I’m not around, but when I’m around, I hope they’ll ask me to join in their street hockey game.

After all, we have fun playing together. They do more of the things they want to do when I’m around, and they have more fun doing it. I do, too…

6 Responses to When Adults Play With Kids