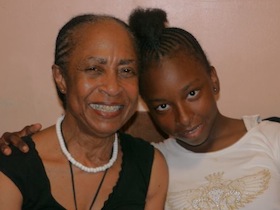 I just made a $3,000 investment in a solution to the kids’ neighborhood play problem last week. I couldn’t be more pleased.

The recipient is The New York Kids Foundation, which runs a one-block long “play street” on Lyman Place in the South Bronx, one of the poorest places in the United States. The head of the Foundation, Hetty Fox, was born and raised on that street. She left there to teach at a university in Southern California in the 1960s, but she came back to her family home on Lyman Place in 1970.

She returned exactly when her neighborhood needed her most. In the decade of the seventies, the South Bronx suffered from a huge rash of arsons which depleted about 40% of all housing stock, and population dipped by 57%. Even today, its U. S. Congressional District is the poorest in the United States.

For forty years now, Fox has been working very hard for kids on Lyman Place. This summer will mark the 34th consecutive year that she will run a “play street” for neighborhood kids. Most New York City play streets are run by the police, via its “Police Athletic League,” but the law also allows streets that conform to certain rules and get over 50% of neighbors to sign a petition to run their own.
So, with zero taxpayer money, Fox has been running her play street on Lyman Place every weekday in the summer all these years. She’s out there every morning at 8am, putting up the barricades and setting up play equipment. “I think the play street should be ready for children at 8 sharp,” she noted in a recent New York Times article. “They have to know we’re ready for them.”

Kids play common American games like basketball and New York street games like Ringolevio and Double-Dutch. They dabble in arts and crafts. Far more than merely giving kids there things to do, Fox has created a safe refuge for kids right where they live. She’s also a great role model for kids there – a university-educated woman and former college instructor who could have escaped and left her neighborhood behind, but instead decided to return to do what she can to hold it together.

During the school year, Fox has run an afterschool educational program there, teaching kids things like world energy and foreign languages.

Most, if not all, of the other options for investing money to help kids takes them to places beyond where they can walk themselves, so inevitably, their neighborhoods suffer. Like many children-and-nature programs, Nature Bridge’s Yosemite Institute takes urban kids to a faraway park, in this case Yosemite National Park. Even “community-based programs” based at schools or community centers pull kids from a pretty broad area. Unfortunately, the roaming distance of most kids these days is just one or two blocks, so these programs are anti-neighborhood, too.

Fox laments the fact that these programs send kids the message that they need to strive to get out of their neighborhoods because the flip side of that message is that their neighborhoods are undesirable places. Instead, Fox has helped turn Lyman Place into a very tight-knit place where kids want to be.

Lynnell Wiggins, 13, says that she feels very safe hanging out at Lyman Place, but not anyplace around it. She looked outside Fox’s second floor window one June evening. “There’s a cousin of mine there, a friend there, and oh – there’s another cousin,” she said.

“Ms. Fox doesn’t have any kids, so all the kids around here are her kids,” Wiggins adds. Indeed, many other kids have glowing things to say about Fox, and she about them. One of her many regular activities there is writing recommendation letters for the kids she knows who are applying for jobs or school admissions.

The feeling in and around Fox’s house on Lyman Place the evening I visited was remarkably warm and friendly, not what one would expect from a neighborhood in one of the poorest, most crime-ridden urban areas in the United States. Fox and Wiggins yelled friendly barbs out the window at people on the street. Outside, adults sat in lawn chairs and a half dozen or so kids rode bikes and walked around. A few of those people walked in and up the stairs to Fox’s apartment, unannounced, to chat.

So, I’ve made a contribution that supports kids’ play in a charming oasis within a blighted, dangerous urban area, but I called this an “investment” in the opening of this article. The idea of an investment is that the impact of the money goes well beyond the goods and services that it buys today.

How is giving $3K to Lyman Place an investment? Fox will buy art supplies and games and sporting goods with that money. While it’s great that not one cent will go to salaries or “administrative overhead,” how does money for supplies like these help more than the kids at Lyman Place?

I believe that improving the lives of our children must inevitably begin right in their immediate neighborhoods, so by helping to create shining examples of great neighborhoods, I’m demonstrating what can be done and how to do it.

For all the great things I recounted at Lyman Place, Fox is always scraping for cash. Over the past few decades, she’s tried every tactic she can think of, including going door-to-door to dozens of local businesses with a sales pitch. Just a few weeks ago, Fox called me in a panic to send her my $3K check because the play street was starting in just two weeks, and she had no money for supplies.

I want Lyman Place to gleam and sparkle in the South Bronx. I want kids and parents from all around to gravitate there, until the parents figure out that their kids would be even better off if they made their own Lyman Place right where they live. And I want parents and activists in other cities to read about Lyman Place and be inspired to try the same thing.

After spending a few hours at Lyman Place, I understood why it’s such a special place, but to really gleam and sparkle and be a shining example, it needs more money. Unfortunately, Americans are far more likely to make child-related investments to places that have nothing to do with where children actually live. Maybe, just maybe, the example of Lyman Place can change this.

Stay tuned. I’m partnering with the Project for Public Spaces to create a new fund to help neighborhood-level efforts like Lyman Place. Lyman Place will be one of the first recipients, but beyond funding supplies and facilities for these places, we’ll be providing training as well to create more Hetty Foxes. I’ll have much more to say about this soon. It’s very exciting!

2 Responses to Investing in Kids’ Play