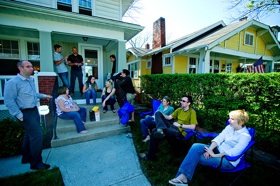 Until the last few decades, front porches and stoops were the fertile breeding grounds of American neighborhood life. When the weather was warm enough, families passed every evening there. Porches are the subject of fond nostalgic books like The American Porch. When my father and I recorded a video about his childhood of play, we started on his old front stoop. This was also the setting of Chaz Palmentieri’s wonderful play and movie, A Bronx Tale.

Porches and stoops are a midway point between a family’s private life and its public life. While they’re on the private property of the houses they’re attached to, the fact that they’re within eyeshot and earshot of the sidewalk and street invites neighbors to spontaneously drop by.

Thus, I’m heartened to find that porches have made a roaring comeback in recent years among newly constructed houses. While there’s no hard data on the percent of houses built with porches before 1992, anecdotal evidence from homebuilders suggests that they practically died out in the 1960s and 70s. In 1992, the US Census states that 42% of all new houses had a porch, and that this number increased to 58% in 2007. The National Association of Homebuilders reports that its members expect that number to eclipse 70% by 2015.

So, does this trend mean that people will be socializing more with their neighbors in the front of their houses?Well, on the face of it, it would appear so. If more families have front porches, families will probably spend more time on front porches, and this is highly likely to lead to more neighborhood socializing.

But how much of an increase can we expect? That depends on the total environment in front of the new houses that have front porches, as well as a host of other social variables that have nothing to do with the physical environment.

Focusing on the environment surrounding a porch, the crucial questions are: 1) is the porch within close eyeshot and earshot of pedestrians who might pass by, and 2) does the public space fronting the porch – i.e. the street and sidewalk – encourage those pedestrians to pass by?

In the New Urbanist community I profiled last year, The Waters, porches are very close to each other and to the sidewalk. Passers by can’t help but participate in porch conversations. (See this NPR.com article for a discussion of New Urbanism and porches.)

At my own house, I’ve designed and built a “Front Yard Family Room” way in front of our house, not a front porch. That’s because a porch added to our house would squeezed between a huge garage and a high fence. (I’ll have a lot more to write about this exciting project shortly!)

Thus, we don’t even have a short wall between us and the sidewalk like most porches have – we have no wall. The photo below shows my wife feeding a bedtime snack to my 1-1/2 year old son. In twenty minutes out there that evening, we had two conversations with pedestrians we didn’t even know. 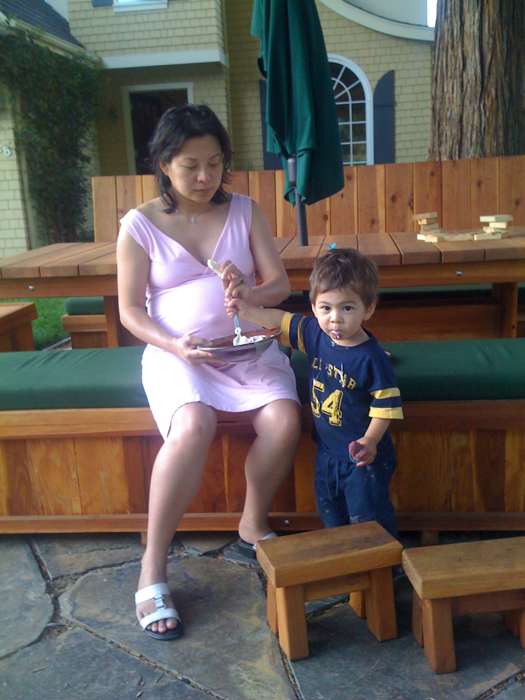 Even if you can build it just right, will they come, and will they stop to chat? To be drawn to walk by your house, there should be destinations like retail shops, parks, or schools close to your house. In addition, there should be a sidewalk in front of your house so people feel safe walking there.

Of course, you don’t want people to just pass by – ultimately, you want them to stop and chat. For this to happen, the street should be fairly calm. People just don’t like to hang out and talk when cars are speeding by.