N Street: An Introduction to Cohousing and “Retrofit” Cohousing

[This is the first of a series of four articles on N Street, a retrofit cohousing community in Davis, CA. I visited there on October 1, 2007. The other three articles published thus far are: N Street: Kids’ Lives, N Street: Where Everyone Knows Your Name, and N Street: Making it All Work.] 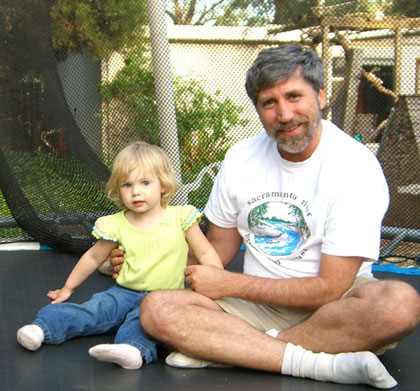 Cohousing is probably the most innovative solution to the problem of lack of community in America today. Members live in a complex of houses, townhomes, or apartments with shared resources. The most prominent of these shared resources is a common house, where members share community dinners a few times a week. Most inhabitants rave about the wonderful community bonds in their communities, and can point to real benefits in their everyday lives. (To learn more about cohousing, visit The Cohousing Association of the United States’ web site.)

Unfortunately, however, two decades since cohousing was introduced in the United States, roughly .003% of all Americans – fewer than 10,000 – live in cohousing.
The primary reason why cohousing has not spread to a significant proportion of the American population is that in its pure form, cohousing takes a tremendous amount of time and commitment. As defined by cohousing pioneers and architects Chuck Durrett and Katie McCamant in Cohousing: A Contemporary Approach to Housing Ourselves, cohousing inhabitants must cooperatively participate in the design and building of their cohousing community, and then they must move from their current homes to this new community.

Furthermore, because such a community needs a fairly large amount of land, these communities are usually far from large city centers, so people usually have to move far to live in them. So, for instance, there are no pure cohousing communities on the entire San Francisco peninsula. The closest are in the East Bay.

“Retrofit” cohousing, while not the pure form of cohousing, provides a model that can potentially be applied to any existing community in the United States. Any of us, in our own neighborhoods, could very well try to implement individual things that N Street has done to increase community and improve our kids’ lives. I visited what many people consider to be the leading example of retrofit cohousing, N Street in Davis, CA, recently.

A street called N Street and the houses on it existed long before N Street cohousing co-founder Kevin Wolf and his next-door neighbors decided to start having regular potluck dinners back in 1986. The map above denotes the present area of N Street cohousing with the house symbol.

Those two houses tore down the fence between their back yards, and as more houses joined, more fences were torn down. Most of the houses involved, at least initially, were rental houses where the inhabitants had to negotiate the tearing down of fences with owner landlords. Kevin recalls, “We told the landlords we’d carefully take the fences down and save all the wood, and if things don’t work out, we’d put it back up again.” Today, N Street cohousing has 17 contiguous houses without fences, plus two houses across the street.

When the first cohousing book came out in 1988, they got the idea to rotate responsibility for preparing dinner among families rather than potlucks. Then, in 1990, as more families joined the group, they had two weekly communal dinners in a garage. Today, N Street has a common house with a large dining room where they have about four community dinners a week, plus a kitchen, a TV room, a foosball table, and a two-bedroom apartment upstairs.

In retrospect, Kevin notes that the two crucial steps that N Street families took toward becoming a vibrant retrofit cohousing community were having communal dinners and tearing down fences.

In the upcoming three articles on N Street, I’ll discuss the lives of children there, the social ambiance there, and some details about how N Street operates.

4 Responses to N Street: An Introduction to Cohousing and “Retrofit” Cohousing